As a student at West Johnston High School in Benson, NC, Veronica Catete wanted to take computer science. Advanced Placement computer science was finally offered as an online class during her senior year, but taking the class meant that she had to miss most of her final year of band class where she was first chair oboist and pit captain.

So Catete, who earned her Ph.D. in computer science last spring, learned that if she worked ahead in her online class, she would get to spend some time in band class. The reward inspired her to work quickly and efficiently through her programming assignments.

Her experience in high school convinced her that she wanted to study computer science at NC State. Early in her undergraduate career here, she would return home on the weekends to spend time with her preschool-aged sister, who was battling cancer. And to make that happen, she worked ahead to complete her classwork in order to get home on Fridays where, among other things, she taught her sister to use a computer. 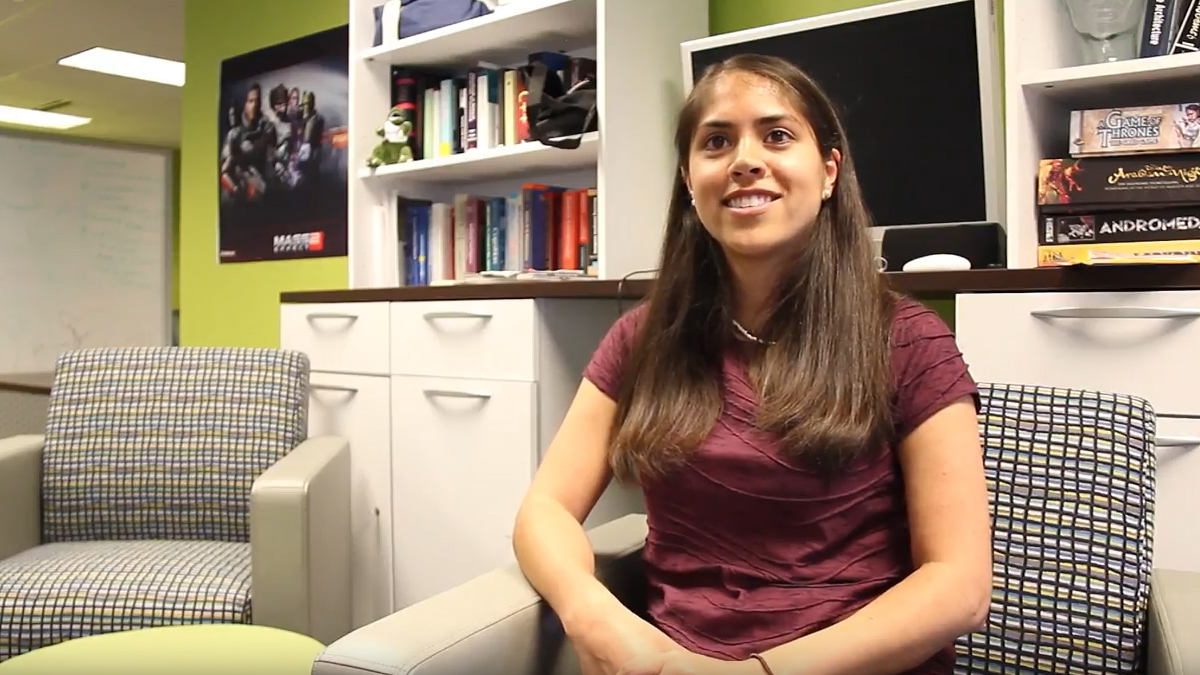 When her sister died at age 5, Catete was a sophomore at NC State, and she needed to find another way to give of her time and talents. She got involved with SPARCS, a university outreach program that helps teach middle school students about computing, a fitting way to honor her sister’s memory. Catete participated in the program for several years before expanding it and becoming regional coordinator. Through SPARCS programs, middle school students would come to campus for weekly classes or day camps on computing.

Throughout her computer science studies, Catete has had one primary goal – to share her love of computing with others, especially middle school and high school students from rural areas who face the same limitations in computing education that Catete did.

When Catete and her family moved to rural Benson from Ohio, she suddenly found herself in a strange, new world, “between tobacco fields and pig farms,” she said. Her excitement about her computer science class had a lasting impact on her life, and that’s something she wants others to experience.

Catete says she didn’t come from a STEM family, though her mother worked in manufacturing and her stepfather had a doctorate in chemical engineering. When she came to study computer science at NC State, she really didn’t know how that discipline differed from other fields of computer studies.

Catete has shared her passion for computing through many different outreach efforts that involve teaching computing to middle or high school students, either at their own schools or at her university campus. In 2017, she received an Equity Award for Women from NC State’s Council on the Status of Women, recognizing her service.

She carried the SPARCS program with her to the University of North Carolina-Charlotte where she earned a master’s degree in computer science. The SPARCs program continues at UNCC today. From 2013-16, Catete was president of the NC State’s STARS Computing Corps, the student group that oversees SPARCS outreach, until an advisor told her she needed to give up the role and focus on completing her doctorate.

Through the STARS Computing Corps, she helped launch the Lady Wolf App-A-Thon, a recruiting effort where high school girls come to NC State to try their hand at computing applications. She was also involved in FLAMES – Females Learning Awesome Math, Engineering and Sciences – a high school computer outreach program.

One of her most meaningful training efforts was a six-week program in Rwanda called Pivot Academy, where she partnered with the non-profit Mothering Across Continents and recruited four other people from NC State to join the effort. The most of the group that traveled to Rwanda stayed for two weeks, while Catete and another graduate student remained there for four more weeks.

A big part of the effort involved helping Rwandan high school students to develop mobile apps for social good. The students determined the type of apps they wanted to develop.

“One was a milk delivery app, where you could enter in the type of milk you wanted, how much you needed and your location,” Catete said. “It would send a ping off to a delivery service, and they would deliver milk to your home. I would never have thought of that, but that’s really cool.”

The Pivot Academy for the girls in Rwanda – which focused on physics, chemistry, biology and computing — took place the first two weeks of the program. Student groups worked on projects as part of the academy. One group of girls wanted to build an orphanage, so Catete and crew helped the girls turn the project into a budgeted project proposal.

Corporate donors sent the group with tablets – 40 per classroom — and the group found many ways to use them, Catete said.

“Teachers wanted science books put on the tablets because there wasn’t a set of classroom books. Before they got the tablets, they would handwrite texts onto blackboard, then students copied them onto paper. But we needed to provide them with materials that didn’t require an internet connection, because connectivity was not always reliable,” she said.

The STARS Computing Corps at NC State provides students with support throughout their academic journey, through mentoring, professional development and research experiences in computer science.

The group showed teachers how to network the class tablets so that when they added new information to the texts, it would appear on all tablets. Catete and her colleagues also demonstrated the tablets’ camera features and other ways the camera could support science instruction, even “video chatting” with scientists from across the globe.

Catete’s graduate research focused on “broadening participation in computing” and was based on an National Science Foundation initiative to get more people in computing, especially under-represented minorities, women and people from rural areas. In the process, she realized that many high school teachers responsible for new Advanced Placement computer science principles classes have little or no real computer experience.

AP Computer Science Principles rolled out recently, and as a result, there is a need for more computer science teachers, she said. “Usually (high school programming teachers) only have one to two years of programming experience. So my goal was to find out how you teach someone to teach AP Computer Science Principles when they don’t actually having a computer science background,” Catete said.

After graduating in May, Catete continued her work at NC State. She is now research scientist with the STEM + C project (c for computing), a joint initiative between the computer science department, the Citadel, and NC State’s Friday Institute for Educational Innovation. This project works to help integrate computing into K-12 STEM courses by training teachers on how to use computational thinking activities in their classrooms.